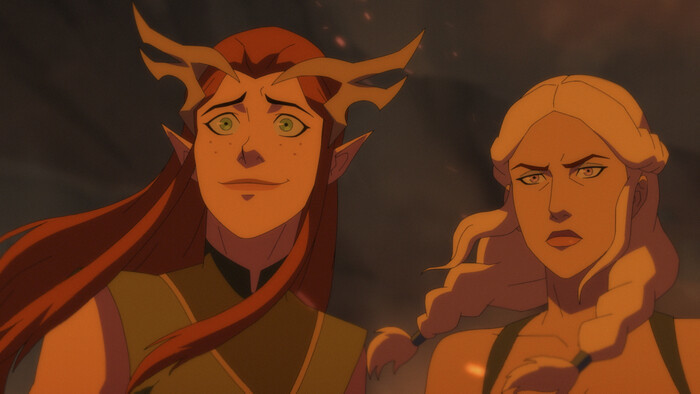 RAVING REVIEW: Sometimes, you don’t know what you’re missing until you give it a chance. That was the case here, I’m a self-proclaimed geek, nerd, dork, etc., but I had never dipped my toy into the world of Dungeons and Dragons. This experience proved to me how wrong I was for not doing that sooner!

“After saving the realm from evil and destruction at the hands of the most terrifying power couple in Exandria, Vox Machina is faced with saving the world once again—this time, from a sinister group of dragons known as the Chroma Conclave.”

I was thoroughly impressed with the second season of THE LEGEND OF VOX MACHINA. Though I have never delved into the world of Dungeons and Dragons, this epic fantasy series hooked me from the first episode. The first season sets the scene, introducing the characters and their unique abilities and personalities. Each episode is only 30 minutes long, making it easy to binge-watch and follow along with the story.

The story follows a group of heroes known as Vox Machina as they embark on a quest to stop a powerful group of dragons from taking over the world. The animation and graphics are stunning, immersing the viewer in the fantastical world of Tal'dorei. The attention to detail in the animation is awe-inspiring, and the fight scenes are gorgeously choreographed (you can choreograph animation, right?) The characters are gorgeously drawn, and the voice acting is top-notch.

The second season delves deeper into the characters' backgrounds, exploring their pasts and emotional journeys. The show also explores themes of friendship, family, and self-discovery in a way that is both engaging and relatable. The humor is also well-done, with a healthy dose of great jokes to keep things light. This cartoon is not for kids, with adult jokes and animation throughout.

Overall, THE LEGEND OF VOX MACHINA Season 2 is a thrilling continuation of the series, with stunning animation, emotional storylines, and incredible voice acting. It is a must-watch for fantasy adventure fans and those who, like myself, have never played Dungeons and Dragons. Fans of the series will be less impressed with this latest installment.